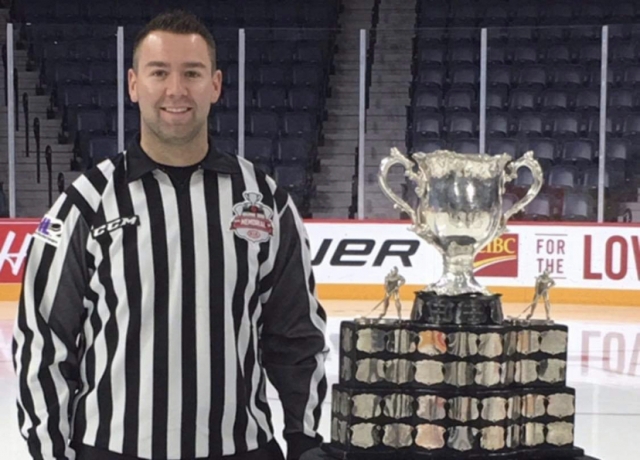 When he was 10-years-old, Tarrington Wyonzek became a hockey official for Novice and Timbits games just to make some extra money. Some officials never get the chance to progress past that level, but Tarrington has and it's led him to the professional level.

The Yorkton native reffed his first junior game when he was 16-years-old. Three years later, he was hired as a linesman for the Western Hockey League. Tarrington went from just trying to make some money to lining games for one of the best junior leagues in the world.

"That was a super great moment, it felt truly amazing," said Wyonzek. "I was being exposed to such great hockey at such a young age. There were a lot of officials that I worked with along the way that helped me and pushed me. I'm thankful for a lot of them because they helped me get where I am today."

Eventually, Tarrington's name was getting called upon to line the most important of games. He worked last year's Game 7 between the Vancouver Giants and Prince Albert Raiders. Roblin's Jakob Brook and the Raiders went on to win that game.

Tarrington also got the call to work the past two Memorial Cups in Regina and Halifax. The Memorial Cup is the Canadian Hockey League national championship.

"Getting the chance to line the final game between Vancouver and Prince Albert was amazing," continued Wyonzek. "Getting the Memorial Cup opportunities were great, it was a great experience."

Tarrington's duties, however, haven't stopped at the junior level for the past couple of years. He lined American Hockey League games out of Winnipeg for the Manitoba Moose. Now eight years after he was hired as a WHL official, Tarrington is making the jump to the professional ranks full-time.

He's now a full-time AHL and ECHL linesman after he found out in June. That mean's he'll be travelling all over North America as he continues to chase his dream of making the NHL.

"Working full-time pro hockey is really exciting, I'm looking forward to having a good year," he continued. I've been told ever since I was a kid that I had to conquer my highest league to move on to the next one. The goal is now conquering the AHL and ECHL. If I do that, I could get my chance, but I have to focus on the now and making it a good year."

The Yorkton native started his season last weekend in Virginia. His season and travels continue this weekend as he's in South Carolina.

"The most exciting thing for me is just seeing different rinks and different cities," concluded Wyonzek. "It's cool being able to see all of this new stuff. Also working with men, it brings a different level of communication to the ice and I'm looking forward to that."