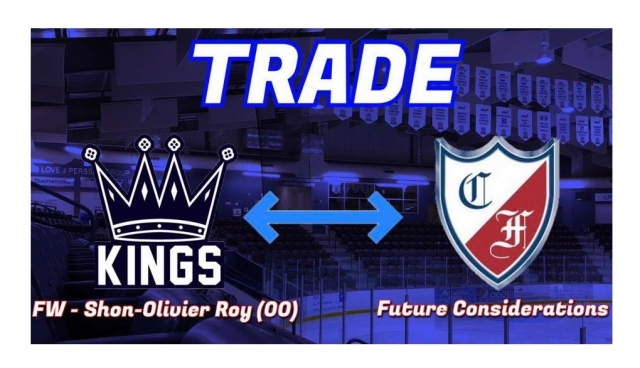 When the Dauphin Kings open up their main camp later this month, a newly acquired forward will be there.

The team traded for Shon-Olivier Roy in exchange for Future Considerations. Roy comes from Longueuil Collège-Français of the Quebec AAA Junior Hockey League.

"Talking to a few people he's got a decent skill set, good speed and we're hoping he's a kid that can finish for us," said Doug Hedley, Head Coach, and General Manager. "He played on a veteran team last year so he was kind of in the bottom nine."

"Since Noah Basarab decided to head to the NAHL, we're hoping he can fit in nicely," he added.

"The opportunity for him to be an impact player here is there for him," added Hedley.

Main camp is set to start on Thursday, August 29. It rolls on right through the weekend, ending with the JoFo Cup. The preseason starts on September 2 against the Swan Valley Stampeders.

Two seasons ago, Dauphin went 14-44-1-1 which gave them 30 points. Under Hedley last year, the team dramatically improved. They ended up with 64 points off of 29 regular-season wins. They also clinched a playoff spot. With the 2019-20 regular season just over a month away, Hedley is ready to take the next step in his second year back with the organization.

"There's no question that we want to get better and we need to get better," added Hedley. "We have some young guys that now have a year under their belt in the league. We're going to be a very competitive team."

"I think the league is going to be very tough this year," he concluded. "Every team is going to be improved. We just need to make sure we work hard and step up. Our goal is definitely getting a Top 3 spot in the first 60 games."

You can catch the Kings preseason opener on September 2 as it comes at Credit Union Place. The puck drops at 7:30.