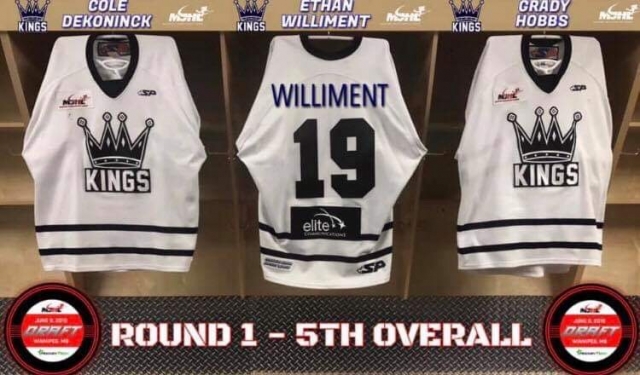 The Kings had the 5th pick in the draft and they selected forward Ethan Williment from the Winnipeg Warriors. The 14-year-old had 38 points, 16 goals in 34 games this past season.

In the second round, 16th overall the Kings drafted forward Brayden Stevenson. The 15-year-old played for the Interlake Lightning this past season, scoring 14 goals and adding 18 assists for 32 points in 34 games.

A defenceman was selected in the third round, 27th overall. Ben Bonni played for the Winnipeg Sharks and had 6 goals and 21 points in 33 games.

In the 4th round, 38th overall, forward Drake Pahl, from Ste. Rose, was drafted. He had 18 points in 35 games for the Parkland Bantam Rangers this past season.

With the 49th overall pick, in the 5th round, forward Sean Williams from the Rink Hockey Academy Bantam Prep Team was picked. In 24 games, the 14-year-old had 8 goals and 8 assists.

To finish off in the draft, Dauphin had pick 60 in the 6th round and took a defenceman. Zach Turner played 36 games for the Southwest Cougars and had 20 goals and 8 assists.