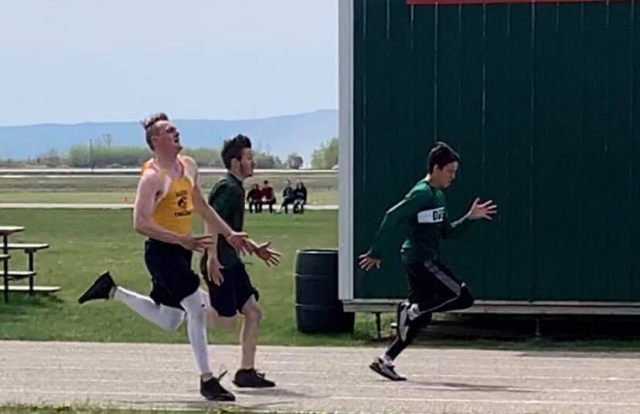 Dauphin's Ethan Chartrand has one goal when it comes to his future in Track & Field. He wants to be just like Canada's Andre De Grasse who is a superstar on the track. That's down the road, however. For now, Ethan just wants to give it everything he has as he represents the Dauphin Clippers, and he's sure done a great job in achieving his current goal.

Competing in the Zone Championships late last month, Ethan showed the Parkland how strong he is. He finished 1st in the 400m race and 2nd in the 800m race. The most impressive part about his finishes is, he did so against varsity aged athletes.

Being in grade 10, Ethan made the jump up to compete against the Parkland's best grade 11 and 12 athletes.

"It was really fun to compete against everyone," said Chartrand. "It was definitely hard because I was competing against older guys. It was a fun experience overall and I'm pretty proud of myself."

"My mindset was just to have fun. I just wanted to give it my all and not stop," he added.

Ethan is now in Winnipeg for the Dairy Farmers of Manitoba Provincial Track & Field Championships. He will once again compete in the 400m and 800m races. Competing at the event will be a first for the 15-year-old track speedster.

"It's going to be very challenging for sure, I'm really excited to see more people and compete against people from around the province," added Chartrand. "I'm feeling pretty calm, but at the same time I'm very nervous about it."

When it comes to preparing for the event, Ethan has been giving it his all since his great finishes at the zones. That's because he knows he will have to be at his best to have success on the provincial stage.

"I've been jogging a lot at night and I've been doing some long distance sprints at practice," added Chartrand.

Ethan isn't the only Clipper that will represent Dauphin at the provincials.

Jayselyn Nybo and Thompson will race in the JV girls 1500m.

Sergei Blazic and Rueben Houle will compete in the Varsity shotput and discus.

Ethan Thacker and Blake Zamrykut will compete in the Pentathlon. That includes the 100m, 800m, high jump, long jump, and shot put.