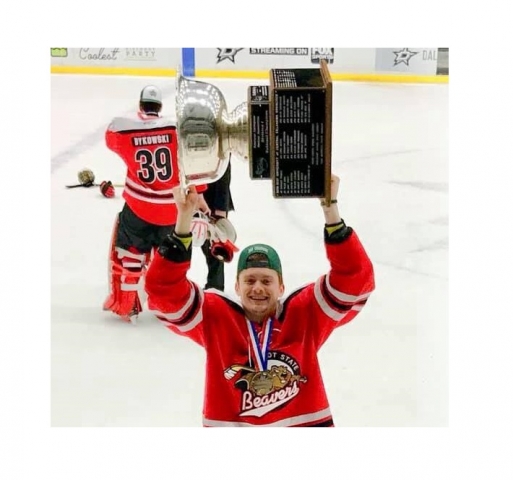 After two and a half solid seasons with the Swan Valley Stampeders, Connor Navrot began his college hockey career with the Minot State University Beavers and what a freshmen year it was.

Connor and the Beavers won the American Collegiate Hockey Association Division 1 National Championship by beating Iowa State, 3-1. It was a tournament that featured several upsets en route to winning the title.

Going in as the #6 seed, the Beavers beat #11 Illinois in the round of 16. The Beavers next took down the #3 seed Adrian squad before beating the top-ranked Lindenwood team in the semi-final.

Lindenwood went 31-2 before their loss to Connor and the Beavers and they scored seven goals in the first two games of the nationals but they couldn’t get a single puck into the Beavers net.

Iowa State upset Michigan-Dearborn in their semi-final, but they couldn’t solve the Beavers in the winner take all tilt.

“It’s pretty surreal, I still don’t have the words to describe it, I don’t think it’s hit me yet,” said Navrot. “To do it in my first year is really special. Hopefully, this continues to happen.”

“I always knew we were going to be a contender and there was no doubt in my mind about that,” added Navrot. “In the past, the team has always been an older group and they always lost in the semi-final.”

19 of the members of the team including Connor entered the year as first-year players.

“Yeah to be able to win it with all the first-year players is definitely very special,” added Navrot. “We’re going to be a contender for the next few years to come; I have no doubt in my mind.”

During his time with the Stamps’, Connor was a regular contributor on the scoresheet as he put up 107 points. That trend continued right into his college career.

“Yeah, I’m really happy with my effort,” added Navrot. “I’m just proud of my effort and hopefully, I can continue with it going forward.”

Connor now gets a little bit of time to soak in the past season before he’s set for a big tournament. He will join the Canadian men’s national team as they take part in the 2019 Ball Hockey World Championships from Friday, June 14 to Saturday, June 22.

Connor and the team will enter as the second best team in the world behind Slovakia.

Most recently he played for the U18 and U20 Team Canada and he got a call after this past World Championships in Winnipeg. That call was an invitation to make the jump up to the men’s team for the first time.

“Yeah, it was definitely a pretty special phone call and I can’t wait,’ said Navrot. “Hopefully we can bring a gold medal back.”