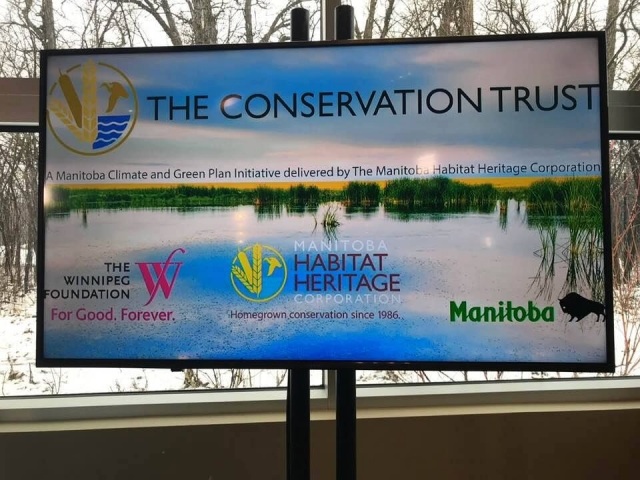 Intermountain Conservation District’s tree plantation got a big boost from the provincial government on Monday.

Overall, there are 41 projects announced by Manitoba Habitat Heritage Corporation Conservation’s Trust. Those projects totalled over 2.2 million dollars with groups getting support between four and 125 thousand dollars.

IMCD is in the process of expanding their tree plantation, going up to 6 acres planted this year.

“We’re working with a couple of local landowners this year that have donated land for the plantation,” said IMCD manager Jeff Thiele. “Right close to Ethelbert. They were kind enough to donate the land and do a lot of the maintenance. So we’re going to be supplying a lot of trees here.to expand that plantation.”

The money is going to go towards buying saplings.

“So the six thousand will go straight out to the purchase, and some of our contribution will be in-kind maintenance, and staff, and some of the cost to actually move the trees out to different commutes, and that sort of thing.”

In a media release from the province, they say the funding is going towards four distinct program areas. They include watersheds, habitat and wildlife, connecting people to nature, and innovation and conservation planning.

“The Conservation Trust offers a lasting approach that will fund conservation, and will inspire new ideas and projects that may not have been possible until now,” said Tim Sopuck, chief executive officer, Manitoba Habitat Heritage Corporation.

The Conservation Trust was announced in Budget 2018 and is now permanently endowed so it can support and inspire important conservation projects for generations.  The fund is expected to generate about $5 million a year and will be managed by The Winnipeg Foundation, with projects administered, tracked and evaluated by the Manitoba Habitat Heritage Corporation.