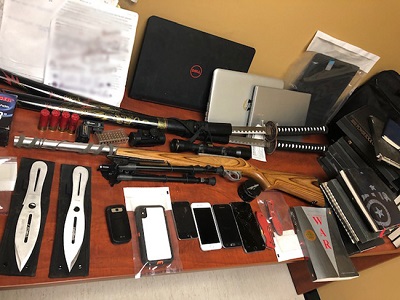 An investigation into the threats led police to a 30-year-old male suspect from the RM of Fisher. RCMP checked several locations, but could not find the man.

On Thursday, at approximately 10:30 am, officers responded to a traffic collision in Fisher Branch. One of the people involved in the accident was the 30-year-old suspect.

He was arrested and found to be in possession of six knives. A vehicle search found two swords, ammunition, and several notebooks were seized.

Officers then got a warrant to search the man’s home, where they seized a rifle, ammunition, computers, cellphones, and notebooks.